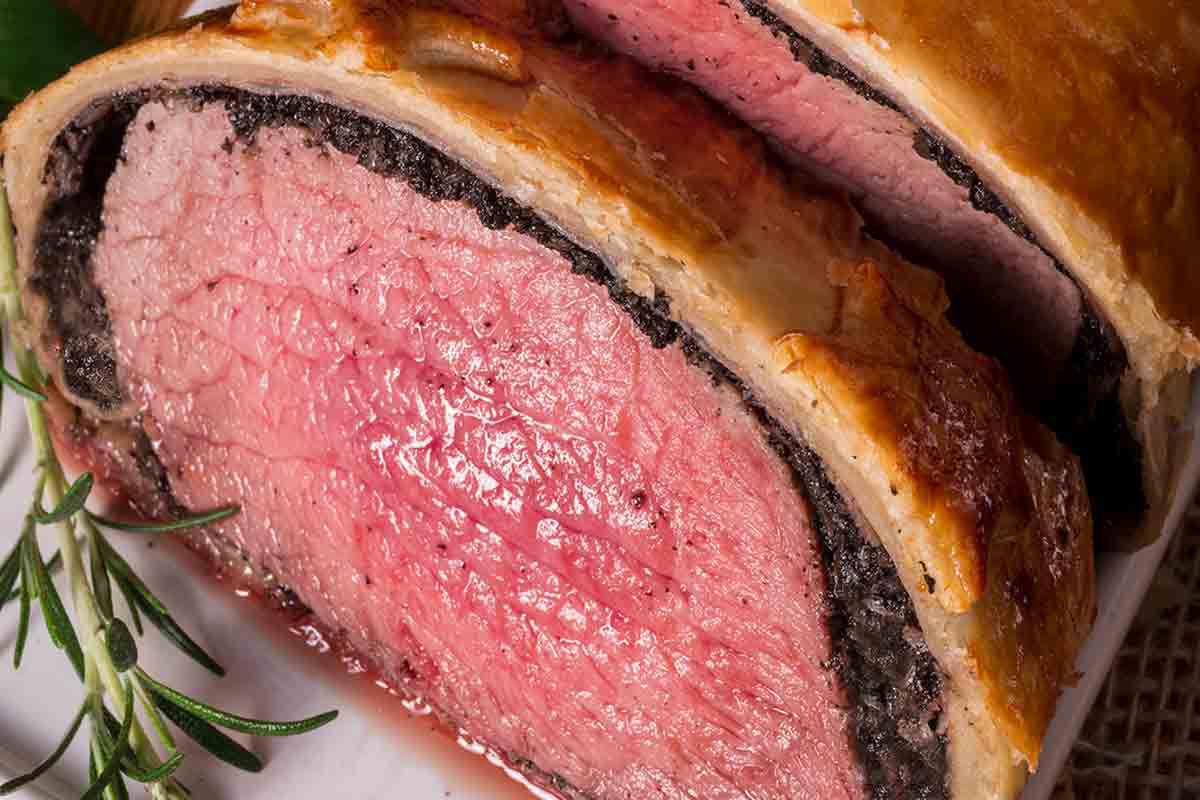 Beef Wellington, a recipe I first cooked whilst working in London.

It’s a bit flash as it uses beef fillet but like all my recipes you can just change out the beef fillet for lamb, salmon, venison or pretty much any other lean meat or even eggplant.

Preheat the oven to 200*c
Trim the silverskin and excess fat off the beef fillet. Cut in half. Then with the tail make a cut 75% down towards the smaller end of the fillet. Fold the end of the fillet tailback on itself to create an even-sized fillet.
Using butcher string tie a couple of rings around both ends of the beef just to keep it straight when you sear it. Heat two cast iron frypans and season the fillet heavily with flaky salt, a good crack of pepper and a drizzle of oil. Sear on high for 3-4 minutes on each turn until well coloured. Allow to rest, once cool brush with Dijon mustard.
Cut the pastry two times larger than the beef fillet, then lay 6 pancakes down onto the pastry. Combine the mushroom duxelles with the plate and spoon over the pancakes. Lay the beef fillet into the centre and roll the pastry over the top until fully sealed. Trim both the end and press down on the ends with a fork until sealed.
Place onto an oven tray and into the oven, cook for 20 minutes before turning down the heat to 160*c for a further 20 minutes. Continue to probe to 55*c Remove and rest for 20 minutes.

Start by sifting the flour into a bowl, add the eggs and truffle oil, mixing to combine.
Gradually beat in milk, whisking into a smooth batter. Heat a large non-stick frypan with a touch of oil, pour in 1/4 of a cup of batter into the pan and roll the batter around until a thin layer has been formed. Cook until golden and then flip over and cook for another 30 seconds before flip out.

Heat a large cast-iron frypan, add the oil before sauteing the shallots, garlic and then adding in the livers. Quickly saute before turning once golden. Season
Add the brandy and red wine.
Quickly place livers into a blender and blend.
Slowly add the cream then the butter one cube at a time. Once all has been added, check the seasoning. Remove and place the pate into a fridge to chill and set.